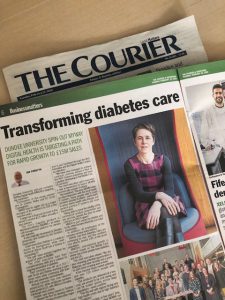 It’s great to see our company, along with many others from the region, profiled in the Business Matters supplement in the Courier today.

Our CEO & Clinical Lead Dr Debbie Wake spoke about our plans to transform diabetes care both in the UK and internationally, with a rapid scale up of the business over the next 5 years.

Our flagship product is MyDiabetes MyWay – an online self-management platform for people with diabetes. Chief executive Debbie is a medical doctor by background, whilst Chief Technical Officer and Co-founder Scott Cunningham’s background is in software architecture within healthcare – he is also the technical lead for SCI-Diabetes, the national integrated online diabetes health record for NHS Scotland.

The pair have worked together for around 14 years on MDMW and Debbie said their complementary skills are a catalyst for their growing innovation in diabetes.

MyWay Digital Health was set up in 2017 and our annual turnover has now reached £1 million, while employee numbers have grown to 25, with offices in Dundee, Edinburgh & London.

Debbie spoke of how being based in Dundee has allowed the company to develop without the large overheads of some of the other major cities.

She added “Dundee also has a good talent pool, particularly given the local university and technology sectors, and a down-to-earth ‘can do’ attitude. We initially grew the company through awards, grants, innovation and entrepreneurship funding.

“Scotland is a great place to grow a company and we have benefited from entrepreneurship and accelerator schemes – including Converge Challenge, Scottish Edge, the Unlocking Ambition programme, the RBS Accelerator and some early support from the Digital Health Institute.

“Further growth in NHS England was in part facilitated through the NHS Innovation and the Digital Health London accelerators.

“We have now managed to achieve contracts covering around a third of the NHS England population and have a pipeline developing in the Middle East, US and India.”